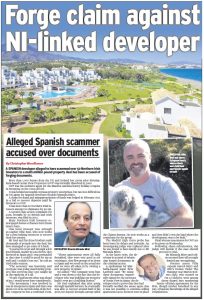 More than 1,000 buyers from the UK and Ireland lost £45m after Birmingham- based Ocean View Properties (OVP) was formally dissolved in 2009. OVP was the exclusive agent for the Manilva Gardens luxury holiday complex in Estepona on the Costa del Sol. It was behind successful overseas property enterprises, but ran into difficulties as UK agent for Spanish developer Ricardo Miranda Miret. A claim for fraud and misappropriation of funds was lodged in February 2011 in a bid to recover deposits paid by investors to OVP. It has more than 50 Northern Irish investors among 120 claimants for £9.2m. A second class action complaint for £2m, brought by 30 British and Irish investors, was filed in 2013. Many Northern Irish investors remortgaged homes to finance their dream luxury buys. One local investor was Armagh ex-teacher Ollie Reel, who now works for a firm helping investors to recover their lost money. Mr Reel and his three brothers sank thousands of pounds into the deal, but have managed to get some of it back.

“It started in 2006 and through a few good friends, mainly in GAA circles, they invested in Spain and I was persuaded at that time it could be good for me as well and I couldn’t lose out,” he told an Irish radio station. “The economy was booming and everyone was going mad buying property, like everyone else I got caught up in the euphoria of it all. “If only I had known what was ahead of me, I would never have considered it. “The investment I was involved in was in Estepona in Spain and there was about 100 of us on both sides of the border, I suppose we lost a combined €12m.

“These apartments were all fully furnished, they were very good at advertising it, they flew groups of us down to Spain and we stood on the actual site and we were all taken in by owning a new property in Spain.” He added: “The company went bust and it was down to the fact that the developer who was building our property hadn’t even got a building licence.” Mr Reel explained that after going through Spanish lawyers, he eventually was able to recover around half of his £145,000 deposit through a group called the Claims Bureau. He now works as a consultant for the group. The Madrid High Court probe has been beset by delays and setbacks. An investigating judge was replaced after he was found to have family ties to Mr Miranda Miret. In the latest twist, the developer is accused of submitting forged documents in the criminal action.

A spokesman for Marbella- based legal firm Lawbird said: “By using these documents, supposedly signed by the secretary of Ocean View in Spain, the developer tried to prove that they had formally notified the estate agent that it was not possible to continue selling apartments as no licences were in place and they didn’t own the land where the development was to be built.” Final witness statements for OVP are to be given on Wednesday. Following these submissions, the judge will decide if the case should proceed to trial. Mr Miranda Miret and others accused have all strongly denied any wrongdoing. Former Aston Villa captain Gareth Barry and BBC’s Homes Under The Hammer star Martin Roberts, who starred on I’m a Celebrity, were among those duped into marketing luxury off-plan apartments for the firm, though neither benefited in any way, or had any knowledge of the alleged irregularities.