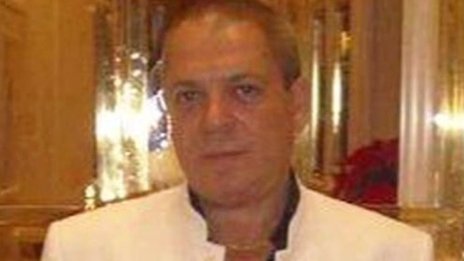 Dance music and the aroma of pizza pump out of restaurants while rows of luxury yachts and cruisers glint in the sun.

Staff clutch menus, hoping to catch a tourist’s eye, while competing ticket sellers hand out flyers about their boat trips to see the dolphins.

This is the Costal Del Sol, a magnet for expats and holidaymakers seeking a bit of Spanish sun with a distinctly British flavour.

It was also the home of millionaire expat Toni Muldoon as he conned vulnerable people back in Britain out of money they could ill afford to lose.

While they signed up to his £5.7m fake escort or debt elimination scams, he “flaunted” his wealth and lived a life of luxury in a 10-bedroom villa.Continue reading the main story

He is a despicable criminal. He has ripped thousands of people off

“Muldoon was a typical expat,” said Antonio Flores, a lawyer who investigated Muldoon.

He added: “He was a vain man, he liked to show his wealth and he liked people to know who he was, even though he was in the wrong business.”

In Benalmadena, described by one ticket seller as a “five-star area”, Muldoon had a pleasure boat and aqua taxi business.

The Caribbean Lady, which has since been seized as an asset, took tourists out into the Mediterranean.

A chalk board and posters still advertise the boat, with a gap in the marina where it was once moored.

A few miles away is the sprawling holiday resort Fuengirola, with its high-rise beachfront hotels.

Muldoon liked to show his wealth here and in Marbella, visiting bars and restaurants.

The headquarters of his fraudulent schemes could be found in an office and call-centre, where tables are still laden with phones. 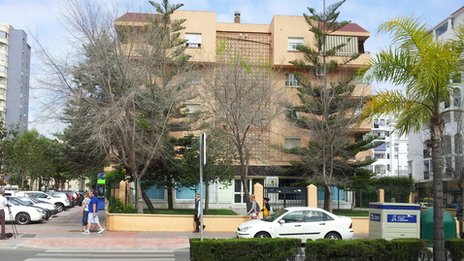 A call centre, crucial to the fraud, was based in an office in Fuengirola

Operators would answer calls from British customers keen to sign up as an escort or to have their debt cleared by one of Muldoon’s bogus businesses.

The BBC asked people in the marina and at bars along the coast about Muldoon, but they are all reluctant to speak about him – except for Mr Flores.

Before the fraud, investigated by Suffolk trading standards, Muldoon extracted millions from UK timeshare owners wanting to sell their properties.

Mr Flores, of Lawbird Legal Services in Marbella, spent 10 years investigating the scam and last year took a group action in the Malaga courts on behalf of 190 UK victims. 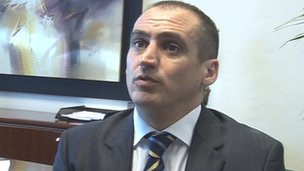 Muldoon was given a two-year suspended sentence for swindle and criminal association.

Mr Flores believes there are people in the Costa Del Sol who have already stepped into Muldoon’s shoes, running cold-call schemes asking for upfront fees.

“They [Muldoon’s businesses] would say there were people willing to buy their timeshare and in order to secure the deal the owners had to send a deposit,” he said.

“What he was doing is ripping people off once and then he would have another company call people offering them legal services to recover the sum which they had lost. It was another scam.

“He’s a clever guy, he’s able to run a business – it does have a structure with offices and staff and telephones.

“They start at 9, they finish at 6 and in that time they have to sign up a certain number of people.

“He is a despicable criminal. He has ripped thousands of people off, each out of £3,000, £4,000. Some of them elderly vulnerable people.

“It was a big criminal organisation.

“He’s made millions over the years, for sure. I expect he hasn’t been stupid and has stashed away a lot of money.”

Mr Flores said the guilty plea in the UK courts was not a sense of closure because the victims of the timeshare fraud had not got their money back, nor had they had the sense of justice of seeing Muldoon go to prison in Spain. 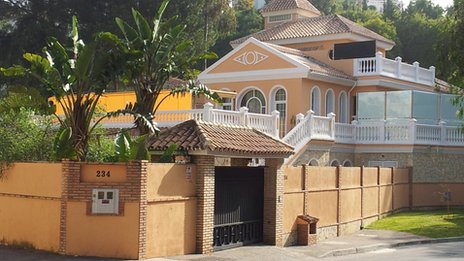 Instead of serving time in Spain, Muldoon returned to a quiet community nestling in the hills above Fuengirola.

Las Mimosas in Campo Mijas feels like a gated community, with each house surrounded by high walls, a gate at least 7ft tall, with buzzer entry and a warning about burglar alarms.

Its residents are mostly expats – Dutch, Swiss and British, to name a few – with Muldoon clearly not mixing with his British neighbours.

His peach-coloured mansion is ostentatious, a swimming pool on a terrace sheltered by something like a giant dressing partition for extra privacy.

But, more than 1,000 miles away from Campo Mijas, Muldoon’s life of deceit was beginning to come crashing down as trading standards officers in Ipswich were gathering a mound of evidence against him.

Perhaps those dominant walls and gates prepared him for his next home, HMP Norwich, where he has already spent several months on remand.

The dramatic change in lifestyle is, in part, a kind of justice for his victims.

“We heard from the police he would be happy to go to jail in Spain because he knew he was going to be treated more leniently than in the United Kingdom,” said Mr Flores.

“He had dreaded the fact of being extradited and he fought his extradition through the Spanish courts.”