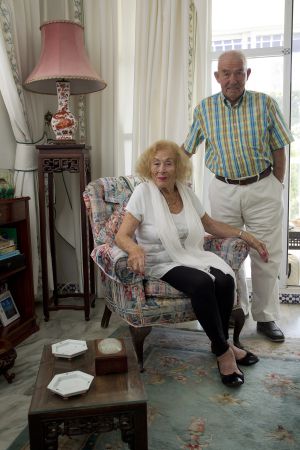 More than 20 British retirees resident in Spain are taking legal action against the Rothschild financial services group, accusing it of fraudulent advertising for complex financial packages designed to avoid paying inheritance tax on their homes, which they now stand to lose. A court in Denia has since summoned Baron David Rothschild, the chairman of Rothschild bank, to answer questions in relation to its investigation into the alleged fraud.

Between 2005 and 2008 independent financial advisers operating in areas such as the Balearic Islands, Alicante and Malaga, sold pensioners loans that would release equity on their homes and see the cash invested in a fund, allowing them to enjoy inheritance tax benefits. The products were provided by a variety of banks, mainly in Scandinavia, but also by Rothschild.

The investment banking company sold around 130 of these products, which were distributed in Spain through the bank’s Credit Select Series Mortgage loan. Rothschild says that the activity was carried out by its Guernsey-based entity in the Channel Islands, outside the jurisdiction of the UK government or UK regulators.

Among those who stand to lose their homes are Julia Hilling, aged 91, and Peter Cosgrove, 84, who retired to the Malaga resort towns of Fuengirola and Mijas in the 1980s. Hilling says she signed up to the Credit Select Series Mortgage loan in 2006 on the understanding that it would reduce inheritance tax on her home – in doing so, she was effectively remortgaging her property.

The following year, Cosgrove says he was contacted by a supposed financial advisor who warned him that as he did not have any family to leave his property to, 80 percent of the value of his home would be lost if it were left to a friend. “I thought that was ridiculous,” he says.

The investments proved worthless, due in large part to the collapse of Lehman Brothers and the financial crisis

The solution, says Cosgrove, was to take out a loan with the Rothschild Bank using his home, which cost him €75,000, and to then invest the money from the loan, which would bring him in around €5,000 annually for the next decade. He would be able to pay back the loan with the interest from his investments. In the event that he died before the loan was repaid, there would be no inheritance tax, as the money had been invested outside Spain.

Cosgrove signed, but says he had no idea that what he was actually doing was taking out a €290,000 loan, and putting his house, which had already been paid for, up as collateral. Others who signed similar agreements borrowed as much as €1 million.

“They made Spain out to be like the Soviet Union” 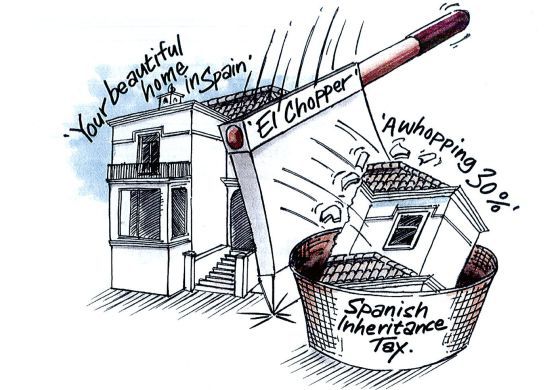 A cartoon from an ad related to Spanish inheritance tax.

One of the law firms representing around 15 people pursuing Rothschild for compensation have pamphlets issued by the bank to sell its Credit Select Series Mortgage loans, which clearly focus on them as a way to avoid paying inheritance tax in Spain. “They made Spain seem like the Soviet Union, with taxes that were all about confiscating your money,” says Salvador Martínez Echevarría of Cremades y Calvo Sotelo, a law firm based in Marbella.

“Too many expats have learned the hard way that Spain’s inheritance tax doesn’t work the same way as their own country’s. This affects anybody who owns a property in Spain, not just residents: the upper limit on inheritances is 81.6 percent. The solution is to reduce the amount of your assets exposed to this […] a mortgage is a very effective way of reducing the total value of your Spanish property exposed to inheritance tax,” reads one Rothschild brochure being used in the lawsuit against the firm.

Cosgrove says that he received €13,200 in advance, but that his investments soon proved worthless, due in large part to the collapse of Lehman Brothers and the subsequent financial crisis that hit markets around the world. He found himself having to pay a mortgage on a property he thought he already owned. “Three months after I signed, I was told that I owed €3,000 and that I was in default.” A few months after that he stopped paying altogether.

Rothschild was not the only bank selling financial packages to people who did not understand them. Norwegian and Islandic banks were also seeking out Scandinavian retirees along the Spanish coast, warning them about Spain’s inheritance tax, which sets a maximum of 34 percent for property left to family members, but can reach as high as 81.6 percent for the super wealthy who have no family.

Cosgrove and Hilling say that they saw Rothschild’s involvement in the financial packages as a guarantee of their legitimacy. The bank was set up in 1798 by a German Jewish family, and over the centuries has become synonymous with high finance.

So far, none of the 130 people who signed up for the mortgage have had their homes repossessed, while Rothschild says that it is prepared to negotiate a solution. It points out that it only provided the loan, and was not involved in the investment side of the deal, which was carried out by financial intermediaries based in Spain, most of whom were British.

In an emailed response, the investment banking company says: “Rothschild provided a small number of mortgages in Spain acting solely as a lender.” It adds that it advised borrowers to take independent legal advice before going through with the loan: “All the loans were signed in the presence of a notary public to make sure that the signatories understood the contract. Rothschild did not provide advice. Rothschild believes that it met its legal and regulatory obligations at all times.”

The bank points out that it only provided the loan, and was not involved in the investment side of the deal

But one of the international financial advisers involved, Adrian Church, says that Rothschild was behind the loans: “If they say they had nothing to do with it, let’s just say they’re being economical with the truth.”

Antonio Flores, a Malaga-based lawyer representing around a dozen of the people who took out loans through Rothschild has managed to get a court in Denia to investigate Rothschild for fraudulent advertising.

Flores says Rothschild offered a product, the Credit Select Series Mortgage Loan, that was sold to pensioners as a legal means to reduce the value of their otherwise unencumbered homes, for Inheritance Tax mitigation purposes, but that the Tax Agency, on the contrary, has ruled that such scheme constitutes fraud.

“In short, independently of what happened to the investment, Rothschild advertised a loan aimed at reducing inheritance tax, which is a breach of tax law,” says Flores.