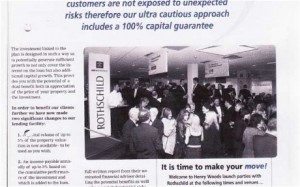 It represents a test case for at least 800 British pensioners across France, Spain and Portugal who bought into equity release schemes in the belief that by remortgaging their properties and allowing the money to be invested offshore, their children’s inheritance tax liability would be mitigated while they would receive a lump sum and a regular investment return to cover the new mortgage.

According to Mr Flores it is illegal to knowingly indebt oneself by remortgaging one’s property in order to invest offshore and mitigate Spain’s inheritance tax, and as a result the equity release product should never have been sold.

For the expats represented by Mr Flores, their offshore investments have depreciated in value and the banks, including Denmark’s biggest bank Danske Bank and Nordea Bank SA, are threatening to repossess homes used as collateral against the loans.

The lawyer acting on behalf of the British expat pensioners, Antonio Flores of Lawbird Legal Services, has taken the case to the Madrid’s Audiencia Nacional, or high court, alleging that his clients were duped by unregulated financial advisors who worked in conjunction with the ten banks, of which the majority are Nordic.

He has asked for the application of all equity release contracts to be suspended and an investigation into the legality of the product and the role of the banks to be started.

It remains to be seen if the recent decision made in a separate case by a Malaga high court judge who ordered Icelandic bank Landsbanki to return a British couple’s home, clear their debts and pay €25,000 in compensation will set the precedent.

“Of course, the high rates of inheritance tax in Spain are a major concern to expat British pensioners and these so-called financial advisors,” Mr Flores told Telegraph Expat, “many of whom were unregulated, took advantage of this concern and misled them.

“One firm of international financial advisors in particular, Henry Woods, has been on the equivalent of Spain’s FSA blacklist since 2003 for providing investment services without authorisation, yet British bank Rothschild appeared alongside the firm in sales literature and at promotional parties at hotels (pictured) in which pensioners were invited along to learn about these equity schemes.”

While Guernsey-based NM Rothschild & Sons accepts it provided loans to a number of pensioners to fund the remortgaging of their homes and the investment in offshore funds, it has distanced itself from the advisors who brokered the equity release schemes.

A spokesman for Rothschild said: “Rothschild is confident that the Spanish courts will agree that there has been no wrongdoing on its part in relation to allegations being made against a number of banks by a lawyer in Spain.

“Whilst Rothschild has previously provided loans to a number of Spanish property owners its role was as a lender only. The bank had no part in providing investment or tax advice to borrowers. The borrowers were advised by their IFAs in Spain, who received no commission from the bank.”