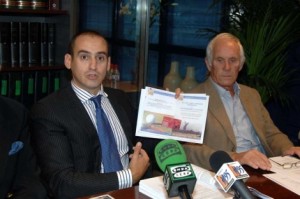 As reported in the Olive Press, victims of illegal equity release schemes formed the Equity Release Victims Association in September to put a stop to Scandinavian banks ‘robbing’ expats of their property.

Now, a group of some 25 foreign residents, backed by Antonio Flores from the Marbella based firm Lawbird, have filed a lawsuit in the High Court in Madrid for the crimes of fraud and false advertising.

Moreover they are appealing for the ‘illegal’ contracts – taken out between 2004 and 2008 – to be declared null and void.

“This scheme is criminal,” explained Flores.

“I can see how much people are suffering from it. It is seriously damaging their health and eroding their well-being, and it has absolutely got to finish.

“These people are at a time in their life when you can’t make money, you only have what you have and these banks have taken that away.

“As far as the banks are concerned it was a very lucrative contract. They took a commission every time they switched stock and made money even if it lost.

“But the way they sold it was completely illegal and it was reckless and careless,” he added.

It comes after foreign banks, mostly Scandinavian, convinced predominately retired foreigners to take out ‘predatory mortgages’ on their homes at a value way above the level of the official appraisal.

Victims were lured in by the false hope they could reduce inheritance tax for their loved ones – who would eventually be liable to pay Spain’s top rate of 34 per cent – and enjoy a salary for life by investing in financial havens such as Luxembourg.

But the scam – which could have as many as 600 victims and it estimated at a staggering 250 million euros – has left many of them penniless.

“Equity release is not safe and a loan against the property with the idea of hiding the money in an offshore account is certainly illegal in Spain,” explained Euan Armstrong, 74, the association Chairman and a victim of the scam.

“We must stop these banks stealing our money.”