The chairman of Peterborough United FC and former property developer Darragh MacAnthony, whose name once adorned MRI billboards welcoming potential buyers to ‘MacAnthony territory’, was back in Marbella this week to answer charges brought against Mac-Anthony’s MRI Property International by a group of about fifty former clients. The group, mainly British and Irish, say they paid 15,000 euros each for furniture packs for properties in Turkey, Bulgaria, Italy, Cape Verde, France and Morocco which were never delivered. 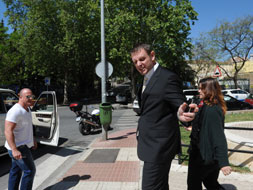 Also appearing before the court in Marbella on Wednesday accused of fraud were Dominique Pickering, Sarah O’Callaghan and Nicola Shaw, all former MRI executives. Michael Liggan failed to appear.

MacAnthony was questioned for two hours, during which he confirmed that MRI had received the money from the claimants but stated that the funds had been transferred to the furniture manufacturers, who never supplied the goods. Pickering, O’Callaghan and Shaw’s statements were all to the same effect. In support of this assertion their defence lawyers have presented a document – which to date has not been shown to either the judge or the lawyers for the prosecution – which apparently shows details of the bank transfers to the furniture providers.

According to the lawyer Luis Fernando González Ordóñez, the Mac-Anthony property companies were effectively closed down without going into administration, with the only representative now being a 90 year old Spaniard, Fernando A. Alcalá del Olmo, sole administrator of the Hispano-Peruvian company, Inmobiliaria Vasco Peruana SAC. A. was also in court on Wednesday and stated that he had never had any direct contact with the other accused, and that he is still in receipt of 600 euros a month paid to him by MacAnthony for his services.

The group of clients who accuse MacAnthony of fraud are claiming in total more than half a million euros which they say they deposited with MRI for the purchase of furniture. Most of the transactions took place in Marbella, in the MacAnthony offices which were housed in the building previously used as his ‘Club Financiero’ headquarters by the late Mayor, Jesús Gil.

The Marbella judge will now have to decide whether to proceed with the case.

FOOTBALL boss Darragh MacAnthony faced a court grilling over claims his company swindled holiday home owners out of hundreds of thousands of euros.

The Dublin-born entrepreneur was quizzed for nearly two hours by a Spanish judge about his property empire and a furniture sales sideline.

Mr MacAnthony, once estimated to be worth €180m, was chaffeur-driven to the court in upmarket Marbella to answer allegations of “misappropriation of funds and theft by swindle.”

Dozens of ex-customers sparked the probe after complaining nearly €500,000 worth of furniture, ordered more than five years ago from his company for apartments in Morocco, Bulgaria and Cape Verde, was never delivered.

The Peterborough United chairman declined to comment as he left after the hearing behind closed doors and was driven away to the luxury hotel where he is staying in a €2,650-a-night private villa.

Investigating judge Beatriz Gomez-Escolar is probing allegations MacAnthony and his business associates misappropriated around €550,000 from 56 customers and stripped MRI of its assets before a de facto closing as part of an elaborate fraud involving the use of an OAP frontman.

The investigation into MRI’s business practices launched in January after a group of 51 buyers ratified an earlier claim that €492,000 of furniture they ordered for holiday homes was never delivered.

Five more people have since come forward to claim they were victims as well.

MRI has consistently denied any allegations of wrongdoing.

Mr MacAnthony, who has not been charged with any crime, has said in the past: “There are no foundations behind these allegations. I certainly didn’t do anything wrong and neither did anyone with MRI when I was there.”

Holiday property mogul Darragh MacAnthony appeared in a Spanish court yesterday to answer charges that he never delivered furniture packs worth £400,000 to 51 customers.

The 36-year-old Irish multi-millionaire and chairman of Peterborough United was summonsed by the Marbella criminal court after the customers filed a complaint against him and his company, MacAnthony Realty International.

Lawyer Antonio Flores said the company had acted “in a disgraceful manner”, adding: “They never filed for insolvency in Spain. They simply disappeared.”

Records show that the former holiday home giant moved its registered premises to a ghost office in Madrid where it was placed under the management of a non-trading Peruvian company run by a 90-year-old man.

MacAnthony denies the accusations and has blamed the credit crunch, which forced several of MRI’s furniture suppliers to fold, and has called the legal action as a “ridiculous suit”.

The Spanish judge will decide whether MacAnthony and the five other defendants should face the charges of “misappropriation of funds and theft by swindle”. The Irish football mogul was grilled by the judge in Marbella for two hours behind closed doors.

Arriving in a white Range Rover with two men, it is the first time the football boss has faced the music in Spain.

He was joined by his former chief executive Dominic Pickering, Sarah O’Callaghan, and Nicola Shaw, a former director of MRI Ireland.

None of the accused, who have continually denied the allegations, would speak with reporters. “I’m sure you are a lovely lady but I am not speaking to you,” said MacAnthony.

It comes three months after over 40 victims travelled to Marbella to tell a judge how the football boss’ company MacAnthony Realty International (MRI) failed to deliver over half a million euros of furniture to them between 2005 and 2010.

MRI – which boasted an annual turnover of more than 100m euros before the crisis – developed resorts in several countries from its main base in Marbella, from where it sold the furniture packs.

The alleged victims – who filed a claim in Madrid in June last year – accuse MacAnthony, 35, of keeping 600,000 euros which they collectively paid for furniture packages for homes in Bulgaria, Turkey, and Morocco.

Meanwhile, Antonio Flores, the Spanish lawyer acting for the group, claims ‘many other’ customers are also affected and due to file further claims.

“The missing furniture is just one of the irregularities linked to the company,” he said.

Flores insisted an additional claim, totalling 15m euros, is being prepared on behalf of up to 200 British and Irish MRI customers claiming they lost large sums in upfront fees.

“Today was just the first step. The courts were gathering information and just listening to what everyone has to say before they decide how to proceed further,” said Flores. “There is also another claim that will be made in the not too distant future that is substantial.”

Dubliner Darragh MacAnthony, who owns Peterborough Football Club, which has just won promotion to the Championship, set up MacAnthony Realty International (MRI) in Marbella as the Millennium began.

Hugely popular on the British market, MRI boasted a £100 million annual turnover before the credit crunch. As well as property development in Spain, MRI marketed villas and apartments in Morocco, Bulgaria and Cape Verde, where the company also arranged furniture supplies.

But now MacAnthony, 35, and his former joint chief executives, Michael Liggan and Dominic Pickering, have been accused of ‘theft by swindle and misappropriation of funds’ in a claim filed in Madrid by 60 British and Irish claimants who say they lost more than half a million pounds in undelivered furniture five years ago.

Lawyer Antonio Flores of Marbella- based property solicitors Lawbird, accused MacAnthony of failing in an obligation to file for insolvency for his Spanish companies.

MacAnthony and his former chief executives have consistently denied any wrongdoing. In relation to the forthcoming claim, MacAnthony, speaking from the US, said: ‘There are no foundations behind these allegations. I certainly didn’t do anything wrong and neither did anyone with MRI when I was there.’

The allegations made in Spain follow what Northern Ireland MP Sammy Wilson described in the House of Commons last year as a property fraud where MRI, or related companies such as MRI Overseas Property, acted as the developer.

In 2008, as a result of complaints against MRI, a tribunal held by the National Federation of Property Professionals said it was ‘appalled to hear of the company’s misleading business practices’. It issued fines of £5,000 and MacAnthony resigned his membership of the Federation.

Prompted by complaints from British customers, the Serious Fraud Office looked into MRI but took no action. However, it sent alleged victims a letter which said that although it did not intend to prosecute anyone, this did not mean that an offence had not been committed elsewhere.

The Costa del Sol property empire has all but vanished. An investigation traced MRI companies to an empty office in Madrid.

Documents show that last October MacAnthony and Pickering, as directors, handed MRI Overseas Property Group to a Peruvian company, under the directorship of octogenarian Fernando Arespacochaga, which appears to have never traded.

John and Muriel Andrews from Ballycarry, Co Antrim, paid £26,000 for a furniture pack in 2006, but Mr Andrews said: ‘We as yet have received no furniture, no offer of a refund, no apology.’